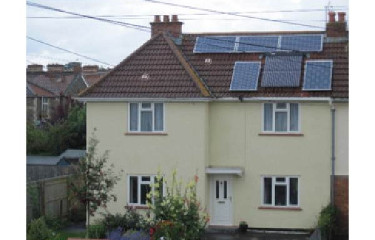 The Story
Sally and Will moved into their 1920s semi-detached house in October 2008. They planned to
use the money left over from the sale of their previous house to create a property with as many
ecological features as they could afford and to grow their own food in the larger than average
garden.

The property already had loft insulation and cavity wall insulation and their first project was to
replace the elderly and inefficient boiler with a modern condensing gas boiler to run the central
heating system. This is used in tandem with a solar thermal unit on the roof to provide mains
pressure hot water through a Torrent heat store located in the airing cupboard. Another project
was the installation of a four kilowatt cast iron wood burning stove which is used principally in
autumn and spring evenings to heat the living room without using the central heating. In October
2010 it was decided to have a small array of five photovoltaic panels installed to generate
electricity which could either be used domestically or sold to the national grid. They have a wood
store at the end of the garden and are fortunate in that nearly all the wood is given to them by
friends keen on gardening and carpentry.

In 2013 Sally and Will added a front porch which, being south facing, provides a warm area
between the front door and the outside and it has been very effective in eliminating draughts.
Finally, earlier this year, replacement A-rated double glazing was installed.

See the Case Study (link below) for more details.