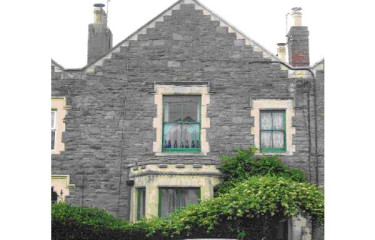 The Story
This is the home of Denny & Paul Welcomme. Denny has lived here for over 22 years, 10 years with Paul. Over the years the house has been totally refurbished in a Victorian style with casement windows and many other original fittings of the past. They like old things but want to be energy efficient too.
So being mindful of environmental issues they have attempted to make use of ‘green’ energy generation and savings and to also use natural resources where possible in their house and garden. The house retains 2 open fireplaces as well as having a multi fuel burner and is heated by gas central heating with a wireless thermostat.

They fitted solar pv panels just before the tariff reduced in 2011 so maximise their income and use as much of the electricity as they can during the day as it’s produced by setting the timer on the washing machine. Through the Immersun they also produce ‘solar’ hot water and so have frequent but water and energy efficient baths!! The PV panels are on an East/West aspect so produce about 50% of output had they been South facing but feel it’s been a good investment.

Energy Saving measures
In 2009/10 they had a kitchen extension installed with thermostatic underfloor heating.
In 2011 - 16 photovoltaic (PV) panels were fitted (East/West) by Solarsense to generate electricity giving a maximum output of 4kW.
In 2014 a more efficient condensing gas boiler was fitted with an Immersion tank by Combi-care, an Immersun device was also fitted to provide hot water from the excess solar energy produced.
The forecast from Solarsense of 3366kW Hrs p.a. has not been met due to the East/ West aspect. However we have generated 4510 kW hrs since Nov 11 to June 14 (about 1800 kW hrs per annum) and feel the approx. 55% generation and the tariff return still makes it worthwhile.

Please see our Case Study (link below) for more details