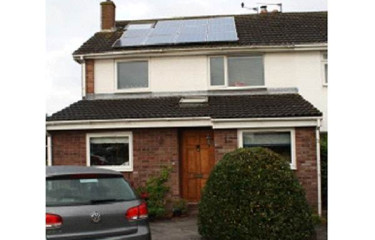 Built in the 1960s of brick and block construction on low-lying land which would be flooded should the sea wall breach. The garden is exposed to south westerly winds and the soil is naturally heavy and contains quite a lot of clay in places.  It has gas central heating and a gas cooker.
Key features – Solar photovoltaic cells, high level of insulation including cavity wall and underfloor insulation, a wood burning stove, conservatory, water butts and a compost heap, a productive garden and chickens.

The Story
Eric and Lucinda moved into 7 MacLeod Close 33 years ago.  The house was a bit of a mess with very little insulation, single glazing and an overgrown garden.
The first thing that we did was to fit double glazing which was initially in the form of secondary glazing.  Along with this we fitted draught excluders, thick, lined curtains and lagged the hot water tank to a high degree.  All were cheap measures which had a short pay-back time.
A conservatory was built which cut down on draughts and gave passive solar gain.
We replaced the flooring downstairs with chestnut floor boards and at the same time insulated under the floor with 2 inch thick Jablite expanded polystyrene sheets.
In October 2006 we bought an Owl smart-meter to monitor electricity consumption.
A wood burning stove was installed in 2009.
PV cells were added in 2010.  Although the roofs are more East-West facing than South, this gave the advantage of doubling the area available for the cells.  They are at least 80% as efficient as a pure South facing roof.  We have 22 cells of 180 Watt output giving 3.96 kWp.
Also in 2010 we had cavity wall insulation and a water meter was installed.
The garden has always been a productive area but this was increased with the addition of raised beds and the purchase of fertile top soil.  Fruit trees, soft fruit, strawberries, rhubarb and asparagus give regular crops with next to no work.  We have a purpose built compost bin and wood store.

Some figures
Electricity usage
From 2003 to 2006 the average units used were 4249 units pa.  From 2007 to 2009 the average dropped to 3333 units which was chiefly as a result of using a smart meter and being more aware of where electrical energy could be saved. 2013/4 usage was 2521 units per annum.
Gas usage
From 2003 to 2009 the average units of gas used was 1250 units pa.
Last year (albeit a mild winter) usage was 639 units.  This was achieved mainly through use of a wood burning stove and cavity wall insulation.  The latter made a much bigger difference than we had envisaged and the house felt much warmer with fewer draughts.
PV cells
These were installed by Solarsense who estimated that we would produce 2807 kWh per annum.
Over 4 years we have produced 13,675 kWh averaging 3418 kWh (or units) per annum!
The FIT (Feed-in Tariff) 4 years ago was 41.3 pence per unit which is index linked and tax free for 25 years.  It is now 46.8 pence per unit.  The PV cells cost £15,755 to install.  Income per annum has averaged £1526 with approximately an extra £218 saving on the electricity bill giving a total annual saving of £1,744.  Pay-back time is approximately 9 years.

Please see our Case Study (link below) for more details